Home > Blog > 2019 Windows Anti-Malware Market Share Report
We review products independently, but we may earn commissions if you make a purchase using affiliate links on our website. We are not antivirus software; we only provide information about some products. 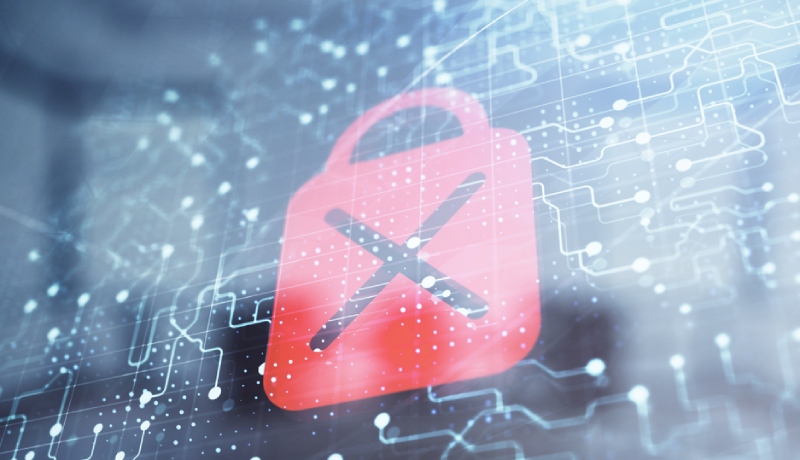 In the most recent report, OPSWAT shared a list of the leading antimalware software and vendors. This company is known for collecting data and sharing it with the public. They’ve been doing it for more than five years. According to the October 2019 report, Symantec and ESET are the leaders of the race, while McAfee is the close third.

The list of the most popular and far-reaching products/vendors consists of ten names, with the 11th called “Other” and representing the rest of the competition. In this post, we’ll take a closer look at every single one and talk about their respective market shares, as well as revenue in 2019. But before we do that, let’s familiarize ourselves with how OPSWAT comes up with these reports and why certain products weren’t included.

A Report On Windows Anti-Malware Solution (Without Windows Defender)

Since the Windows Defender is the default antivirus in Microsoft’s operating system, OPSWAT never includes it in the report. Besides, this isn’t a commercial product (there are no paid editions – never have been). That also explains why there’s no data on this software’s revenue.

As for the analysis and report, while it’s understandable that these aren’t 100% accurate numbers, they’re pretty much the only ones we get. OPSWAT officials also admit that this data can (and does) vary from the real situation on the market. It’s clear, however, that the top-3 are the obvious leaders, while the rest of the bunch has a lower market share.

They’re still all pretty close to each other compared to what’s going on in other tech industries. But, as you’ll learn soon, some of the key players had big falls this year, while others saw an increase in market share. It’s also important to note that OPSWAT focuses on antimalware solutions rather than regular antivirus engines. Antimalware protects against spyware, keyloggers, adware, ransomware, and other threats along with more “traditional” viruses.

The annual revenue is more than 2.1 billion dollars, and, just like the previous vendor, McAfee was established in 1987. But, as you can see, income doesn’t always mean a bigger share of the market.

Founded in 2001, this Bucharest-based vendor has been on the rise since the very beginning. And with such a strong fan base, they’re only about to get bigger. The annual revenue is ~140 million US dollars – that’s the lowest number on the list by far. But Bitdefender is more of a home-oriented antivirus provider, which explains the relatively lower income.

If not for the geopolitical pressure, the Russian tech vendor could’ve possibly achieved even more impressive results. After Symantec and ESET, it is $700+ million is the highest result so far. In 2018, Kaspersky had a 16% growth in the so-called “enterprise segment,” and it continues to grow. At the same time, the North-American sales dropped by more than 25%, and this trend isn’t likely to go away any time soon. 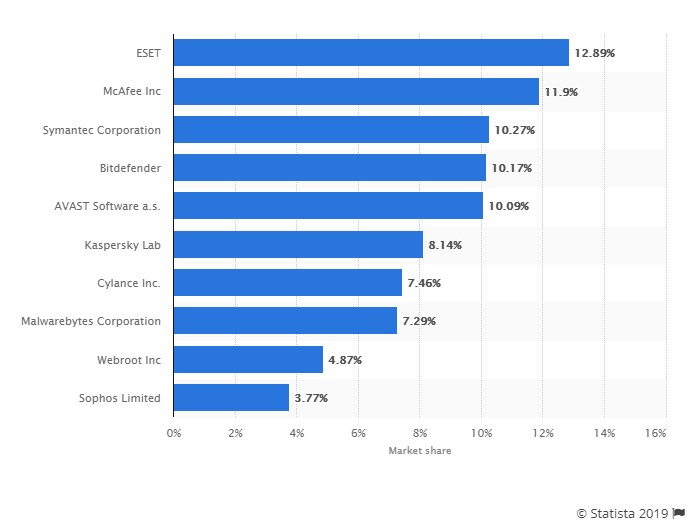 They’ve been experimenting with this technology for a while now. And, it seems like the international businesses/enterprises are starting to trust them with their security. Cylance made $240 million last year, and the 2019 revenue is almost exactly the same. On today’s list, it’s the youngest company, as it was founded in 2012.

Today, Webroot has a market share of 5.88% (almost on par with Cylance). Interesting fact: in early/mid-2019, it was a lot less popular and only had an average share of 2%. In late 2018, the situation was significantly better (5.58%). This shouldn’t come to you as a surprise, though, as cloud-based protection isn’t always popular among enterprises.

In June, it was #5, with a market share of 8.07% (more than Kasperksy, by the way). The estimated annual revenue is $126 million – quite impressive for a company that’s been active “only” for ten years.

The Premium package is this software’s biggest selling point when it comes to home products. It’s available for cheap and protects up to ten devices. The business products are also up to date and offer some interesting perspectives to potential clients.

Last, but not least, we’ve got the “Other” antimalware solutions that take up ~15% of the market share. Those include Norton, TotalAV, Avira, Zemana, and other leading products. As mentioned in the beginning, market share doesn’t necessarily mean better protection. This list allows you to have a perspective and to learn about various vendors and their standings on the global market.

ESET isn’t as reliable as Kaspersky, Bitdefender, and McAfee, but it is higher up the list. If you want to check out the most reliable antivirus/antimalware software, go to the “Review” section on our website and take a look at our detailed reviews. And don’t forget to use the “Compare” option to put two solutions next to each other and, well, compare them.