Home > Reviews > Windows Defender Review 2021
We review products independently, but we may earn commissions if you make a purchase using affiliate links on our website. We are not antivirus software; we only provide information about some products.

Windows Defender is Microsoft’s proprietary anti-malware tool that is used in Windows 8.1 and Windows 10 by default. At the time of its creation, it used to be rather cropped and ineffective, which caused an outpouring of criticism. However, it has been seriously improved since then, so in 2021, it has much to be loved for. Especially, because it became one of the best free antiviruses in its segment. 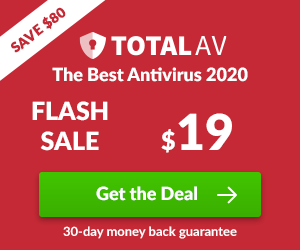 As of today, it is a full-featured antivirus product that provides strong malware protection and some useful extras. It is highly estimated by the world’s leading AV testing labs (though Avast free still scores higher). Windows Defender detects and removes almost 100% of cyber threats without a heavy impact on the system performance.

So, is Windows Defender enough for a regular user? It depends on the user’s type of Internet activity, his expectations, and priorities. Advanced users may want to opt for alternative antivirus products that cover all their needs: TotalAV, Avast or Bitdefender.

Before we start talking about the features and the capabilities of the software, let’s answer one question, which is of primary importance: is Windows Defender good enough to protect you from viruses and malware? The answer is yes, it is. Windows 10 Defender does a decent job in finding and removing most cyber threats. This is confirmed by the world’s major independent testing labs.

AV-Test, which is one of the world’s best-known laboratories, has repeatedly ranked Windows Defender among top-ten antivirus software suites in terms of reliability (read about best antivirus for Windows 10). While it is capable of detecting up to 100% of known and zero-day threats, the rate of so-called false positives is slightly higher than average.

Other major labs published less reassuring figures in 2019. AV-Comparatives estimate Defender security suite at 98.4 points while mentioning its inconsistent performance and high rate of false positives. Finally, SE Labs gives it just a 96% score, which is quite low if compared to the best AV suites, such as Bitdefender or Kaspersky.

In our tests, Windows Defender successfully detected 100% of known threats and 100% of unknown (newly created) patterns. That said, it “found” 2 fake threats – harmless pieces of software that were marked as suspicious. 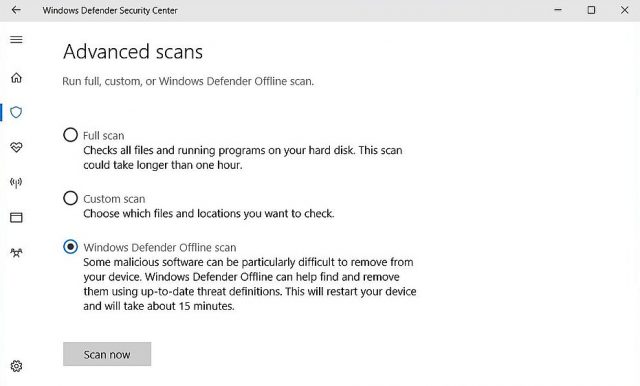 By default, the real-time protection with Windows Defender is on. It means the security software is constantly doing its work in the background. Its impact on the system is minimal, so in most cases, you simply don’t notice it. As soon as a new threat is detected, you get a notification from Defender.

Besides, you may launch additional scanning manually at any moment if you wish. Just choose a folder or a file you want to scan and right-click it. In the context menu, choose Scan with Windows Defender and select between the Full Scan, Custom Scan, and Offline Scan options in the Windows Defender Security Center.

Though we can’t say that Windows Defender is rich in features, it is still more than just a bare antivirus. It offers some quite usable extras, which are commonly found in premium AV products. In particular, the features of the built-in firewall and parental control are worth mentioning.

The firewall is simple but effective for comprehensive protection of the home network. You can manage its settings right from the Windows Defender Security Center. Choose manually what apps you want to allow or forbid through the firewall.

The anti-phishing feature of Windows Defender works great for the “native” browsers of Microsoft – Internet Explorer and Edge. The trouble is that most of us actively use alternative browsers, such as Google Chrome, Firefox, etc. In this case, it is necessary to install the Defender’s plug-in separately. 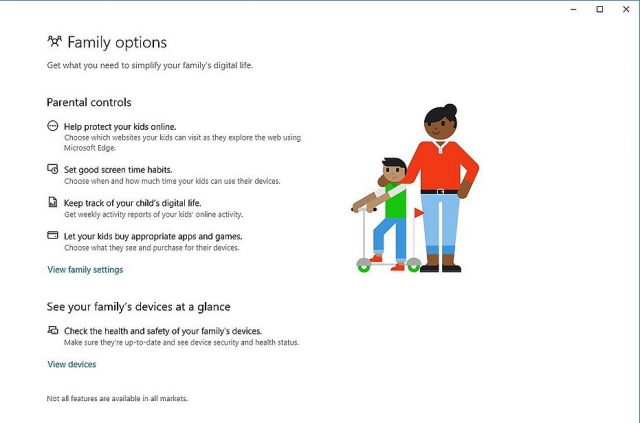 Also, Windows Defender offers the feature of ransomware protection. Frankly speaking, it is a sort of basic, but it works. To protect important files from blocking and subsequent elimination by scammers, you may safely store their copies in the One Drive cloud.

The feature of parental control in Windows Defender is absolutely marvelous, especially taking into account the fact that it is free. You can create separate accounts for all family members and control them from the “main” (admin) account. Moreover, it is possible to set various parameters and limits for different accounts. For example, you can protect children from undesired content by setting limitations in the Edge browser and blocking access to alternative browsers.

To put it simply, TP stops malware from turning the Win Defender off. Microsoft made it globally available in October 2019, significantly improving its antivirus product’s security. According to the official statement, with Tamper Protection active, hackers won’t be able to turn off real-time, cloud-based, and virus-threat protection.

Furthermore, the malware won’t disable behavior monitoring, security updates, and various other components. This brand-new feature is now available for both the free and commercial editions of the Microsoft Defender. The users don’t have to do anything to activate it: Tamper Protection will automatically “kick in” the second they update the antivirus.

Still, if you want to disable/enable it, go Start, Win Security, Virus/threat protection, Settings, and click “on” or “off” under the Tamper Protection menu. Please keep in mind that this feature is only available for Windows 10.

That is a unified platform for real-time, preventive, and after-the-fact protection. The company offers a free trial that allows testing the product and seeing whether it’s a good fit or not. The synchronized defense is one of ATP’s most significant advantages. Thanks to this feature, Microsoft 365 shares resources across devices and identities, which means more security.

Remember: this is an endpoint protection platform and is intended for businesses. Thanks to constant updates, Advanced Threat Protection can easily detect zero-day attacks, breaches, and deal with the threats immediately. Currently, it is available for Windows Server 2016, 2019, and 2012R2. The list of operating systems includes Win 10, 8.1 7 (SP1), and macOS.

Android, iOS, and Linux are also supported (via partners). Overall, the Microsoft Defender ATP is a powerful tool against outside threats for business owners.

Just a year ago everyone would laugh if you’d ask that question. But, as of the latest updates, Microsoft company has actually introduced the antivirus protection for MacOS devices: Microsoft Defender. We won’t be making a separate review for that product as it is pretty simple and has the same anti-virus core as the Windows Defender. Just watch the video or follow the instructions to get the idea on how it works and how to install it on your MacBook, iMac, Mac Mini or Mac Pro. Warning: the installation of this product might be tricky for non-tech oriented people. So, it’s better to ask for assistance in case you’re not sure.

Previously in our Windows Defender review, we mentioned that this software has minimal impact on the system performance. It is an integral part of Windows 8 and Windows 10 OS, so it runs as seamlessly as other basic system components. It doesn’t slow down a computer; in most cases, its background scanning is absolutely unnoticeable.

Usability is an important characteristic of any software product. When it comes to using Windows Defender, its interface is pretty simple for everyone who has ever dealt with native Microsoft products. But even inexperienced users have nothing to worry about, as Windows Defender comes pre-installed, and its basic features are enabled by default.

However, it doesn’t mean you can’t configure Windows Defender according to your needs. Advanced users can easily set the desired settings with a couple of clicks. To adjust the settings, open the Windows Defender Security Center, which can be found in the Update & Security section of the Settings menu.

Microsoft community is one of the largest in the world. The company offers numerous detailed FAQs and forums where you can find answers to most questions. Besides, you can get in touch with tech specialists directly via several channels: online chat, e-mail or by phone. However, there is no dedicated support for Windows Defender; instead, the support service covers all the Microsoft products.

On the plus side, you can find tons of useful information without the need of contacting customer support. On the minus side, if you need to consult a tech specialist directly, it will take you longer than you can expect because of the lack of a dedicated support line.

Looking for good alternatives to Windows Defender? We can help you:

What is Windows Defender?

This is a built-in antivirus solution used by default in Windows 8.1 and 10. It is free, lightweight, and easy to use application that does not impact the system resources. So, it's a great product for weak computers or for those who are not ready to buy an advanced antivirus.

Is Windows Defender safe to use?

In general, yes, it is a quite reliable product to protect against the most popular dangers. It does not need a lot of system resources and is almost invisible. At the same time, it is not very effective against the majority of advanced malware and ransomware.

Is Windows Defender enough for PC?

No, it is not, if you care about real security and privacy. According to many tests from different antivirus labs, Windows Defender does not demonstrate good results. However, it takes its positions in top 10. So, if you do not need powerful protection, you can use Windows Defender.

How do I enable Windows Defender?

How to turn off Windows Defender?

We aspire to provide fair and educational reviews for the users. Thus, we are more than welcome to hear your observations based on your experience. In this regard, we follow certain principles in the verification of the user’s posts or reviews. Our guidelines pursue the following: equal treatment and honesty; non-abusive and non-hateful content; absence of conflict of interests and false accusations. We kindly ask you to follow these requirements when posting your objective reviews Cancel reply