We review products independently, but we may earn commissions if you make a purchase using affiliate links on our website. 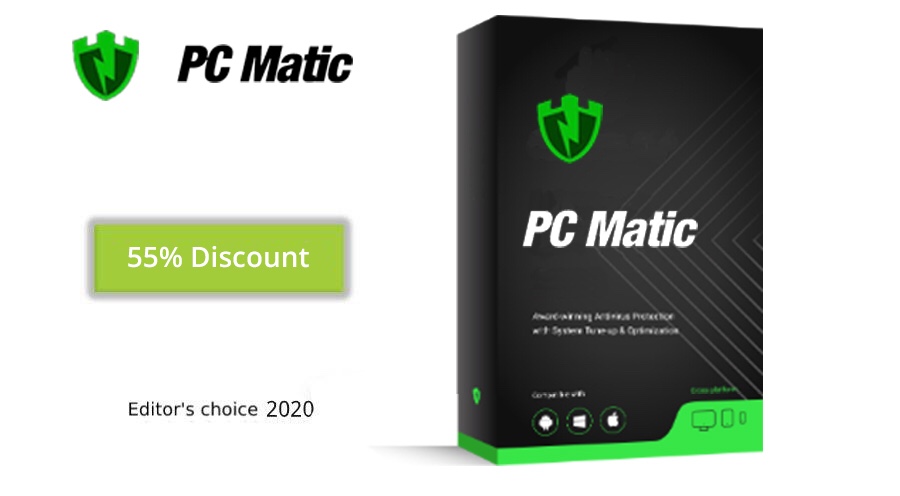 We took our time to review PC Matic, and if it’s affordable protection for five devices that you need, this software is the right choice. Again, this isn’t just an antivirus, but a set of optimization tools that are capable of significantly boosting system performance. Sadly, while the whitelisting approach is quite impressive, it does have some flaws. It constantly blocks legit apps and programs, which can be quite frustrating for many users.

However, thanks to the recent update, you can now white list all known apps before the scan. And with a 55% discount for a yearly plan (5 PCs) there’s no reason not to enjoy this US-based product.

The addition of full Android support is excellent news. That means you can use this product not only on your PC but also protect your mobile device (like a phone or tablet). System load is phenomenally low, and there’s a lot of room for tweaking during the scans. But support isn’t as friendly or quick to respond, and while the interface is friendly, it might be a bit confusing for some users.

Modern-day antivirus products focus all of their resources on detecting and eliminating malware threats. Tune-up/optimization tools come as a bonus, nothing more. That’s not the case with PC Matic: developed by PC Pitstop, an Iowa-based company, it uses an entirely different approach. It constantly offers valuable deals for permanent and new customers.. First of all, it’s a tool for tuning up your computer; the built-in antivirus is just a small part of the package.

Furthermore, you won’t find the traditional signature/heuristic scanning techniques here. Pitstop believes that whitelisting is the best tool against malware. Fileless Script Blocking and RDP Port Controls will also make sure your device is safe and sound. Let us go ahead with the PC Matic review and talk more about these highly unusual methods of dealing with online threats.

PC Matic isn’t a regular antivirus solution – we have already established that in this review. And for that reason, it is a bit tricky to test it. Recently, Virus Bulletin ran this software through a series of tests, and it managed to earn a perfect (100%) detection rating. However, while in the RAP test, this product did fantastic, in the VB100 test, it failed several times.

But, that’s because PC Matic is constantly blocking valid programs. In the AV-tests, the antivirus earned a perfect score for performance, but rather average results in the zero-day attacks test. At the same time, it blocked 800+ legit programs. For comparison, Webroot SecureAnywhere used to be the product with the most false positives, and it had only 12 of those.

In our series of tests where we intentionally plant malware samples on the system, PC Matic blocked them all. To clarify: most of these were blocked because they were not on the whitelist. Only 18 percent of those samples were called dangerous by the Super Shield. Another 54% were labeled unknown, while 11% were flagged as good, but were still blocked.

We launched the same “pack” of malware samples the next day, and the results were different. All the unknown and good samples were now labeled as dangerous. That’s because whenever this product comes across unknown files/apps, it submits them for an in-depth analysis. And, 24 hours later, all these unknowns are identified. 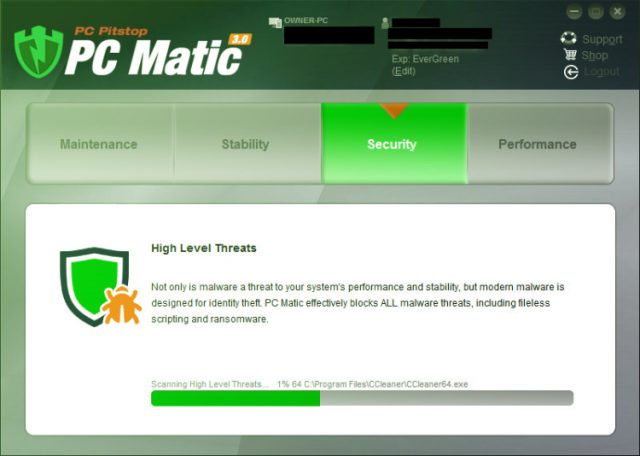 Since whitelisting is a new way of detecting malware, you’re probably wondering how it works. Most antiviruses on the market create blacklists of constantly evolving malware codes/algorithms. PC Matic does the opposite: it creates a whitelist of known safe files. So, whenever it encounters files from the list, it leaves them alone.

All the other files are sent to the company’s research team for analysis and quick tests. As we’ve just mentioned, it takes up to a full day for the team to categorize the unknown files either as safe or dangerous. The most significant disadvantage of this method is that you’ll always have to manually “tell” the antivirus that specific files, programs, and sites shouldn’t be blocked.

But whitelisting isn’t the only technology used by PC Matic. Hackers are known to use tools like PowerShell to install malware without any .exe files. The Fileless Script Block is the company’s exclusive agent that is excellent at detecting malicious scripting activity. Finally, RDP Controls prevents criminals from getting access to RDP ports.

With PC Matic, scans are a bit different from the other products. Instead of running a specific test that focuses on finding and dealing with malware, you run a full scan. It includes complete disc fragmentation, performance tweaks, and, of course, malware detection. First, the software launches a quick diagnostic scan to check for issues in the OS and to attend to them.

Performance, Security, Maintenance, and Stability are the cornerstones of this scan. In a way, this is a combination of tune-ups, optimization, defragmentation, and regular antivirus scans. Junk files, craplets, driver updates, and potentially dangerous files – that’s what PC Matic checks the system for. Next, it runs a number of benchmark tests and creates a detailed report.

Failed tests are painted red; gray indicates that a particular test was skipped. Green means your PC performed excellently in a test. With yellow, blue, and purple, you get quick tips and possible solutions. You can run a malware scan separately: all you have to do is uncheck all the other options.

Note: this is the quick malware scan we’re talking about. If you need the full scan, you’ll need to go Options – Scan Options – Quick/Full Malware Scan and select Full.

The AdBlocker is a relatively simple tool – it works just like all the other ad blockers. With it on, you’ll get rid of most of the malicious and annoying ads. The so-called “malvertising” attacks have evolved over the last couple of years, but PC Matic is doing a fantastic job of eliminating them. As for the ads, they are known to collect personal information, including browsing habits. 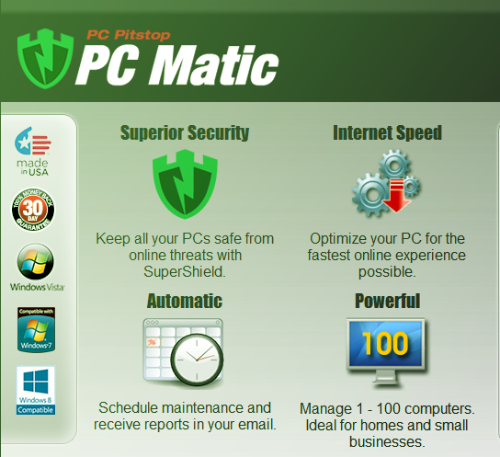 And what about the maintenance tools, you might ask? This product’s Automated Maintenance is quite impressive and is capable of significantly improving system performance. It runs automatically when the user scans the PC. Here is a list of things this tool does during a full OS scan:

You’ll be surprised by how little of the system impact this product has. We already mentioned that it can work with Win XP (along with Vista, 7, 8, and 10). On the official website, hardware requirements include a 1GHz CPU, 512MB RAM, and 1GB of free space on the hard drive. Yes, PC Matic is the least demanding antivirus on the market.

We ran several tests with PC Mark, and they all proved this. An OS Without this software earned a score of 2500; with it installed, the score was 2492. However, it’s important to note that you’ll need to be connected to the Internet to perform tests. Secondly, once a scan is done, PC Matic requires a reboot, and then it starts another scan.

Although this is a highly unusual antivirus, it’s still on par with the most user-friendly solutions. While Android is also supported, it is clear that PC Matic was initially designed for Win-run PCs. Installation is very fast and easy – you won’t have any problem with downloading and installing the software. A regular user might be a bit intimidated by all the available options, but, again, the interface is very friendly.

Some antiviruses tend to warn the user when he/she visits potentially dangerous websites or downloads .exe files from the Internet. One of the best things about this product: it doesn’t “attack” you with pop-up messages all the time. The biggest downside – PC Matic slows down the launch of standard apps. In this regard, it lags behind the competition.

These plans offer protection (and optimization) for five devices. The customers can purchase licenses for up to 125 devices, which is quite impressive and make it best paid antivirus. However, that won’t change anything and won’t give access to any additional features.

In comparison with the competitors, these price-tags are highly affordable. For example, Bitdefender for five devices costs 69.99 dollars, while Kaspersky is available for $99.95.

The Lifetime subscription, in turn, is a unique opportunity to save a lot of money. No other antivirus/optimization product on the market offers a similar deal.

There’s also a free version available, but it’s not particularly impressive. The only thing that a user can do with it is run scans. However, once the test is over, you won’t be able to fix any issues with PC Matic unless you purchase one of the available plans. With the paid plans, you can always rely on a 30-day money-back guarantee and get a refund during those 30 days. 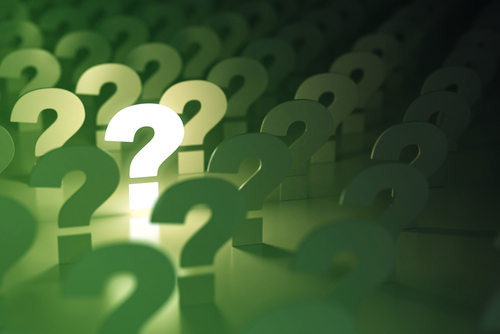 On the PC Matic official website, you’ll find a lot of useful information. The list includes an extensive FAQ page, lots of how-to videos, and user guides. On the Customer Service page, there’s some sort of an interactive knowledge base. The system will ask you a series of questions and give answers depending on the information you share with it.

True, it’s not as easy and friendly as, say, a live chat, but you will be able to solve most of your problems. On the Technical Support page, users can send a message via email. According to the website, it won’t take more than a day for the customer to get an answer. Our team of experts tested that claim several times and confirmed that they answer relatively quickly.

There’s also a 32-pages long user’s guide with detailed info on every single feature PC Matic has. The how-to videos are very helpful and easy to understand. If you’re not a tech-savvy user, these will let you make sense of all the available features. Topics like installation, logging in, scheduling, and system cleaning are fully covered.

Looking for good alternatives to PC Matic Antivirus? We can help you:

What is PC Matic antivirus?

This is an affordable antivirus that supports all the major operating systems and devices. Under one license, you are able to protect up to 5 devices. The antivirus is an old player in the market and is installed on millions of computers around the world. It proved its efficiency over time.

Generally, it’s a good antivirus solution that reliably protects the devices where it is installed. With PC Matic, your important files will always be protected against viruses, trojans, malware ransomware and other online threats. It scans your system in real-time and blocks the malware immediately.

Yes, you can use PC Matic for free. However, the solution is very limited. it does not protect your system in real-time and all it can do is just to scan the system. So, if you need real-time protection, you have to buy one of the premium packages.

What does PC Matic cost?

It costs only $50 for 5 devices — it is one of the most affordable pricing in the market. In addition, you can buy the license of up to 125 devices, the price will change gradually. Also, PC Matic is the only product that offers a lifetime subscription. It is $150 for 5 devices.

Does PC Matic work on Windows 10?

Yes, it works on Windows 10 without restrictions. The company regularly updates the antivirus to make sure it supports all the latest Windows 10 updates. According to many antivirus tests, PC Matic is a very efficient solution. It detects the high amount of malware and blocks it immediately.

The antivirus is developed by the same name company with headquarters in the USA. This is an American company and does not have the offices in other countries. It was created in 1999 as a small online diagnostic service and now it became one of the leading companies in the antivirus software market.