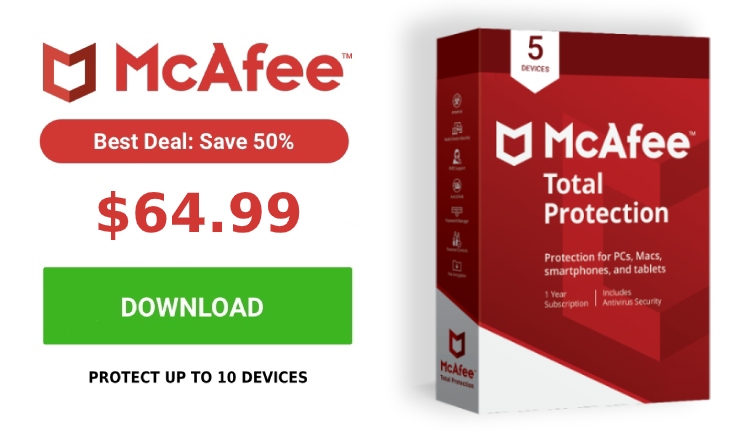 McAfee Antivirus: Is McAfee any Good?

Without a doubt, McAfee is one of the most respected and trusted brands in the world of antiviruses. It’s capable of protecting your computers and gadgets from the modern-day threats. The 30-day money-back guarantee, 24/7 support and advanced encryption options on the more advanced products turn it into a competitive player on the market.

The unfairly high “pressure” they put on your device and the average real-time protection are the biggest downsides of the McAfee products. But again, the prices are competitive. And anti-spam, parental control, and the True Key app only add to the overall appeal.

Like any other Antivirus out there, this one comes with its fair share of advantages and disadvantages. Let’s take a look at both and find out whether it’s the right choice for us or not.

We like:
The McAfee Antivirus is extremely easy to install, use, and change the settings
The level of protection and the rate of virus detection are well above average
The viruses are removed from your device 100%, without leaving any traces
We don't like:
Despite the industry-leading protection algorithms, the above average price compared to the rivals is a big turn-off
The McAfee Antivirus needs more of your system’s resources to work than some of the other offers on the market

Get $60 OFF Special Deal

Today, with international hackers stealing Bitcoins with untraceable apps and planting viruses on our devices to gain access to sensitive data, it is very important to use contemporary solutions in order to protect ourselves. Windows 10 and the latest Mac OS have improved security measures, but they’re just not enough, especially if you’re connected to the Internet 24/7. McAfee certainly is one of the most recognized antiviruses today, and for a good reason. This antivirus is easy to use, support is excellent, and the prices are affordable.

The company was founded more than three decades ago (in 1987, to be exact), and has always had a perfect reputation. As a branch of Intel (since 2010 when Intel bought the company), the famous American tech giant, it has all the resources needed to provide the best possible protection. As of 2014, it is one of the five major antivirus manufacturers and holds 5.7% of the worldwide market. Numerous moguls around the world trust McAfee to keep their precious data safe.

On the downside, real-time protection could be stronger, even though it does perform better than average in multiple tests ran by third-party companies. So, what does that mean for the average consumers? Is it wise to trust this company with protecting your sensitive data or not? Or maybe it’s time to switch your focus to other providers of antivirus packages like Kaspersky or Bitdefender? Read our detailed McAfee review and find out! Our team of experts will help you decide whether this antivirus engine is on par with the leaders or lagging behind the top-5.

Obviously, the #1 concern when it comes to antiviruses is security. As a general rule, there are two areas where they need to prove their worth. Those include the regular routine of scanning for viruses and the much more advanced and complicated process of real-time protection while data is being copied to your operating system.

So, does McAfee impress or disappoint? According to several well-respected third-party companies that specialize in testing various antivirus packages, McAfee security is in the top league for traditional virus detection (that’s true for every single package).

Let us take a look at the lab test results. These were done by independent third-party companies and are as objective as they come. With AV-Comparatives, the most trusted virus testing company, every single McAfee antivirus solution (package) performed flawlessly in the traditional virus detection tests. In real-time scanning, however, this product fell a bit behind the leaders and only managed to achieve average results. Still, the performance is solid and better than what most rivals on the market can offer.

Important note: the biggest concern with McAfee has always been its inconsistency. Last August, it was ranked #5, with 100% detection; however, a month later, it dropped to #14. That’s why AV-Comparatives often publishes summary reports that include results of 5 independent tests. And in that report, McAfee has a 99.6% protection rate and is ranked #6. For example, Avira and Kaspersky, industry leaders, have a 99.7% protection rate. In the AV-Test test, McAfee performed even better and successfully blocked 100% of the potential threats. 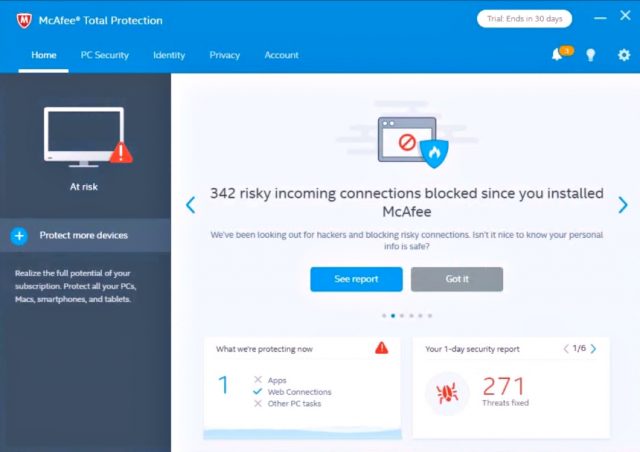 Detection rates are critical, no doubt there, but the overall performance also plays a key role. And with McAfee running on your device, you won’t feel a significant drop in performance. The Task Manager shows that even though there can be as much as 20 background process working when McAfee is active, they require very little resources to operate.

Overall, they use up to 200 Mb of RAM, which is quite alright. As far as CPU and hard drive usage go, McAfee is one of the least demanding engines on the market. Again: there is almost no impact on performance with this one.

In 2016, McAfee earned only 15 points out of 18 in the AV-Test tryouts and became top antivirus software 2016. However, this year, it earned a perfect score (18) – that means it’s excellent at protecting against malware, detecting malicious websites, and putting little strain on performance. Kaspersky and Avira are the only two other antiviruses that earned 18 points. Bitdefender came in second with 17.5. That proves that while in the past, McAfee wasn’t the most reliable solution, today, it’s on par with the leaders of the race.

According to the experts, you’ll never have a complete picture unless you run a ransomware simulator on your device and see how the antivirus behaves. Ransomware is an app/small program that infests your computer/gadget and encrypts any images, documents, and MP3 files it can get to. And a good antivirus should be able to find it and kill it.

For example, during our test, Kaspersky was able to detect it early on. First of all, it neutralized the threat. Secondly, it “healed” the encrypted files. Sadly, McAfee failed at even recognizing our ransomware as a potential threat and let it encrypt a massive number of files. But don’t let this test disappoint you. As mentioned, in real-world tests, this engine successfully detects and neutralizes most threats based on behavior alone, and that’s what counts at the end of the day. 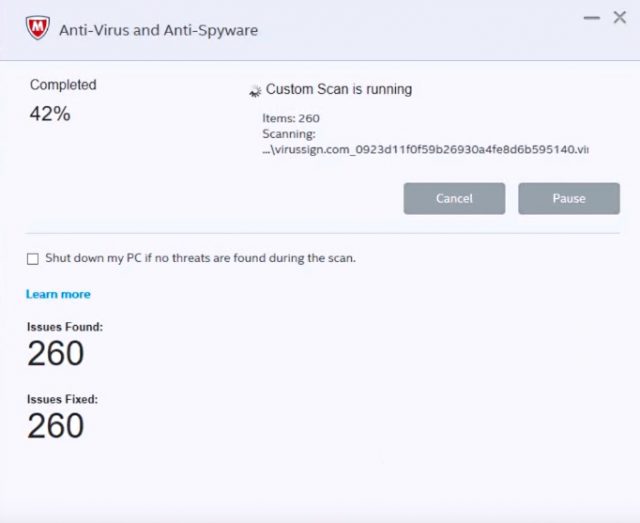 For malware to steal data, get in control of a device remotely, or cause any other harm, the coder needs to know the OS by heart and find ways to “fool” it. A phishing coder, on the other hand, has only one job: to make the user enter his/her login and password into a replica of a well-protected web site.

That way, they steal the credentials and can instantly access users’ credit cards, bank accounts, and more. The list of potentially dangerous websites is being constantly updated, but we decided to check whether McAfee would be able to recognize replicas that were reported but not yet analyzed.

We launched several phishing URLs in four browsers and were impressed by the results. According to statistics, 50% of the antivirus engines fail at protecting the device. Kaspersky used to be the leader with an ideal 100% protection rate. Well, now we have another victorious antivirus: McAfee with the same 100% protection score. Furthermore, it even proved to be better when tested on Mac OS. Kaspersky only blocked 84% of the dangerous URLs, while McAfee managed to perform flawlessly (100%).

We can say with certainty that McAfee is among the friendliest antiviruses available right now. The main window is very informative and shows all the necessary information, keeping the users up to date on the current state of things. By the way, you won’t have to reboot the antivirus or the device after installation – it will start to work as soon as it’s successfully installed.

The user interface allows you to get access to parental control, tune the anti-spam settings, configure the firewall, and schedule future virus scans that will automatically launch when the time comes. Navigation is fast and intuitive.

In 2017, they changed the user interface of the Windows client, and now it’s faster, more intuitive, and looks great. In 2018, the Mac OS client received the same changes, and the two are almost identical. There’s a menu at the top that gives you access to every single feature the antivirus has. The menus include Account, Privacy, Identify, Security, and Home. Everything is right there in front of you and easily accessible. The buttons might seem too big, and the windows might look like they’re empty, but you’ll get used to it in no time.

To install any McAfee product, you need to go online and activate the license key you received after paying for a package. If you click “Yes” on Automatic Renewal, you’ll get the company’s Virus Protection Pledge service. With it, when any malware gets past the antivirus undetected, a team of highly qualified experts will solve the issue remotely. On its own, this service will cost you 89.95 dollars. And if they fail at neutralizing the malware, you’ll get your money back. To install McAfee, download the .exe file, launch it, and follow the guide.

It might take a while (up to 25 minutes on some older devices), but we had absolutely no problems with the installation during our test. As mentioned earlier, the engine doesn’t put a strain on your CPU or your RAM, which means you can keep on using your computer/mobile gadget with it working in the background.

Unfortunately, the most important button – the one that runs a scan – isn’t accessible through one click. You’ll have to find the “Scan for viruses” feature and then choose between a Full and a Quick Scan. Custom scans aren’t available. And, the very first scan can take a while (up to 30 minutes). New scans will take significantly less time to complete. The McAfee scanning is average in terms of speed. Plus, it has an excellent detection rate and doesn’t raise any false alarms during the scan.

The antivirus is compatible with Windows, Mac, iOS and Android devices. There are packages for 1, 5 and 10 devices.

McAfee LiveSafe offers an almost identical set of features as McAfee Total Protection, but it covers an unlimited number of devices.

On the official website, you’ll find a FAQ section along with an extensive knowledge base. It will help you solve most problems on your own without reaching out to customer support. The online chat system is excellent; you can also go old-school and call support or send an email. Tech support is available 24/7 (the phone number is toll-free, of course). McAfee customer service is highly professional, friendly, and the staff is always ready to lend that helping hand. Furthermore, users can buy all kinds of support packages.

PC Tune-up is a service for the computers that are too slow and freeze all the time. The experts at McAfee can help you improve your device’s performance by removing unnecessary apps/programs, stop non-essential apps from taking up precious CPU and RAM resources, and remove “junk” to free hard drive space. Furthermore, they will optimize your browser for a better experience, set up scheduled auto-organizational routines on your device, along with auto-checks, and enable automatic updates of the OS.

A one-time service will cost you $69.95; 1 year of constant support costs $179.95. This is the company’s McAfee®Concierge Gold package. With it, you’ll also get McAfee TechMate, home network setup, virus/malware removal, software installation/configuration, and, of course, PC and Internet tune-up for 1 PC/Mac (protection for two computers costs $209.95). On its own, the Virus Removal Service costs $89.95.

Under the framework of the McAfee promo campaign, you can obtain this top-notch antivirus product with an alluring discount. Its Total Protection suite for 1 device purchased with McAfee coupons costs just $34.99, which means you save $45 or 60% of the original price.

Looking for good alternatives to McAfee Antivirus? We can help you: