Home > Blog > CCleaner Review 2022
We review products independently, but we may earn commissions if you make a purchase using affiliate links on our website. We are not antivirus software; we only provide information about some products. CCleaner, Windows cleanup app, has faced several problems throughout 2017 that have ruined its reputation completely. The most curious thing is that this happened after Avast acquired the application developer company in July 2017.

Users of the most popular utility CCleaner, designed to clean and optimize the Windows operating system family, criticized the developers of Piriform. The fact is that in the new version of CCleaner (5.45), an unrelated “Active Monitoring” program was detected. Unlike previous versions, 5.45 simply did not have appropriate privacy settings to eliminate this impersonal data collection.

Just the other day, users of laptops and Windows PCs stirred up the news that everyone’s favorite CCleaner Free system cleanup program contains malicious software. According to the latest data, more than 2.27 million computer users around the world faced the problem of malicious Trojan through CCleaner.

Today, almost every user of Windows OS heard at least something about CCleaner. Many people recommend it, both online and just in conversations. Some users claim that CCleaner does some incredible miracles with PC, others say it does absolutely nothing. So we are here to answer the rather popular question: does PC need CCleaner at all? And do you need to install it? Well, we have the answer: no. Let’s figure out why.

Why Is CCleaner No Longer Safe? 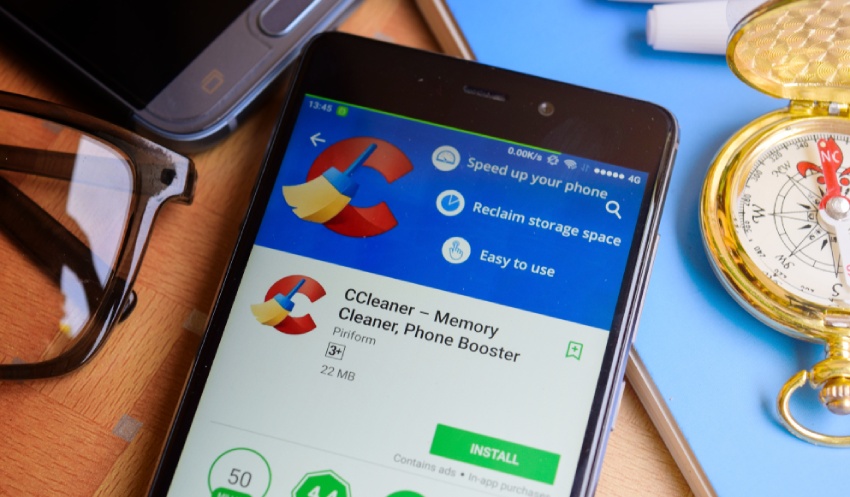 Nowadays, you can hear about many reasons why you don’t need CCleaner at all. We’ve already mentioned some serious drawbacks we couldn’t ignore, but it is worth reconsidering them.
Let’s start with some technical aspects. It is worth remembering that CCleaner has a rather aggressive registry cleanup tool. Without knowing some of the subtleties of the registry device, an inexperienced user risks harming the system by deleting rarely used but important files. It can cause both program failures and complete system failure.

CCleaner has impressive functionality. Yet, it performs each task at a very medium level. CCleaner will be suitable for simple infrequent system cleaning and some small optimization. But those who need more elaborate tools that produce a noticeable result should look towards more specialized software. Moving further, Piriform, the developers of CCleaner, decided to ignore custom update settings. The move caused widespread discontent among users who noticed the app was updated without their permission.

Another problem appeared in version 5.45 – Active Monitoring, which collects information about your system. Most importantly, you can’t disable this feature if you try. It will be turned on automatically after a reboot or a subsequent startup of the application. Piriform made concessions and temporarily removed version 5.45, but despite this, users were not satisfied.

It is worth noting that this version continued to run in the background after closing, to unload the application, it was necessary to use the task manager because the icon on the taskbar did not provide the function “close the application.” Thus, CCleaner is constantly running in the background, collecting data for Avast. This is despite most users opening CCleaner as needed and asking not to collect this information.

One more CCleaner problem was an incident of breaking into a 32-bit version of the application, after which it was infected by a Trojan that collected information about the system and could run arbitrary code. It is worth noting that the developers discovered the hack in time and closed the vulnerability to a moment of mass-scale, but the unpleasant aftertaste remained.

After buying CCleaner by Avast, the application made the users’ tired because of pop-up windows offering to switch to a paid version with automatic cleaning. During installation, CCleaner offers to install Avast antivirus and does it if you do not clear the check mark in the corresponding checkbox.

CCleaner has two purposes. First, it scans and removes useless files, freeing up space on the user’s computer. Second, it erases personal information, such as your browser history and lists of recently opened files in various programs. To some extent, CCleaner is a Disk Cleanup system application that can free up disk space by deleting useless files, such as old temporary program files, temporary Internet Explorer browser files, Windows error reporting logs, etc. You can run this utility at any time and free up some space on your disk. Cookies are a type of browser data that stores site authorization, shopping cart items, service settings, search queries, and the like. This type of data is part of the history of web browsers and is, by default, a part of the cleanup preset. The cookie cleanup procedure has several assignments.

Each of the browsers used must be configured separately, and a list of prohibited or allowed cookies must be created. But the CCleaner program has a universal solution for this purpose. It allows you to create a list of domains common to all browsers installed in the Windows environment as favorites, for which cookies will not be deleted when the same program cleans unnecessary data. And among the latest, include cache, history of visited web pages, history of downloads and, of course, cookies of all browsers installed on the computer.

Start CCleaner, go to the program settings, open the vertical tab “Cookies.” In the center of the window, there is a list of domains for which cookies are stored in all browsers. When you select a domain below, you will see specific browsers. Sometimes it is possible not to resort to complex cleaning of these browsers by CCleaner program but to remove cookies only on individual sites. To do this, select the required domain from the list and click the option on its “Delete” context menu. You can use domain searches for convenience. 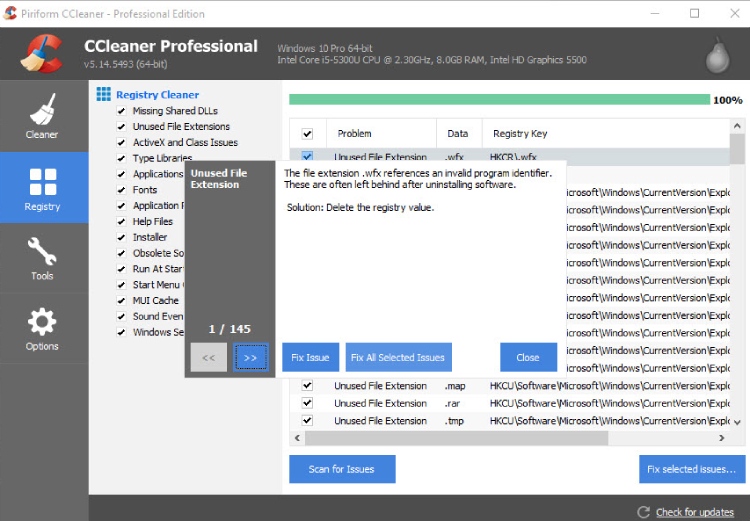 The CCleaner registry cleaner is an extension for unused and old files. So, it detects and deletes garbage entries in the Windows registry. They include corrupted files, ActiveX controls, deinstallators, shared file paths, help files, fonts, shortcut messages, and more. Before cleaning, the utility proposes you to back up the deleted registry branches in .reg file format. If there are any problems after the cleanup, you simply need to double-click the saved file and agree to add data to the registry; the deleted branches will be recreated.

CCleaner registry cleaning is one of the main functionalities. It is produced in semi-automatic mode – first, the records that can be deleted are analyzed, then the deletion itself takes place. Nothing is manually removed from the registry, CCleaner checks its integrity and offers to remove only those keys and branches that remain after uninstalled programs or as a result of serious changes to the OS settings.

The system registry is cleaned from the tab with the concise name “Registry.” You can maintain the default settings. However, if you do this for the first time, I recommend that you keep a backup of the registry when prompted to do so.

CCleaner has a rather effective Startup module, which is especially useful for Windows maintenance. Its task is to disable the unnecessary startup programs in your system. CCleaner also checks individual components and removes unnecessary programs if necessary.

The Startup Manager disables running third-party programs when Windows starts, as well as operating system task scheduler tasks. A good tool to help those who have Skype, Mail Agent, Amigo browser, and some other apps that shouldn’t run in auto-launch together in Windows. 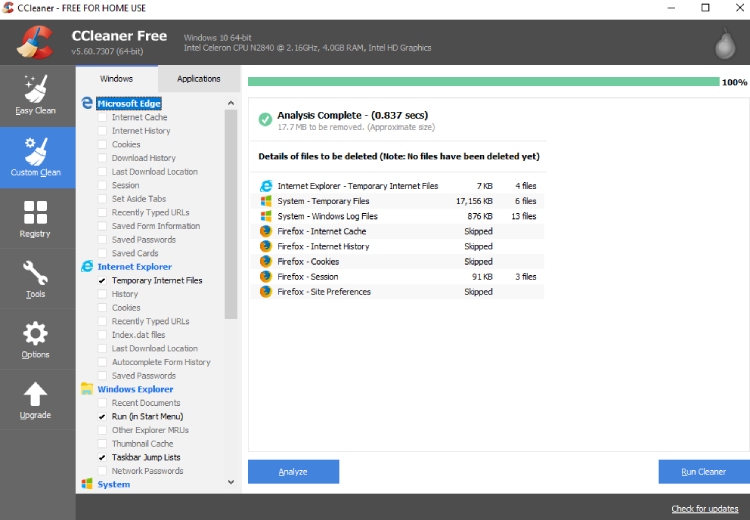 Cleaning the system of temporary and garbage files can undoubtedly be recognized as the most important function of the CCleaner program. Due to a large number of settings available for this option, the user is always able to set the required scan options for each supported application and system file search.

Junk files cleaning allows you to delete a whole bunch of different Windows files, standard operating system programs, and third-party applications. You can quietly remove only temporary Windows files from this list, but if you do not want to contact Technical Support for a problem with a program, you can delete memory dumps, Windows log files, and Windows Error Reports.

CCleaner is one of the most popular “optimizers” of the system in the world. As well as other popular solutions, CCleaner exists in two versions – free and paid, but unlike other programs, the free version of CCleaner is full-featured and not time-limited use.

What is the raison d’être of a paid version then? CCleaner Pro owners are provided with personal technical support, and the program itself has added several extra options that are not too popular among most PC users. 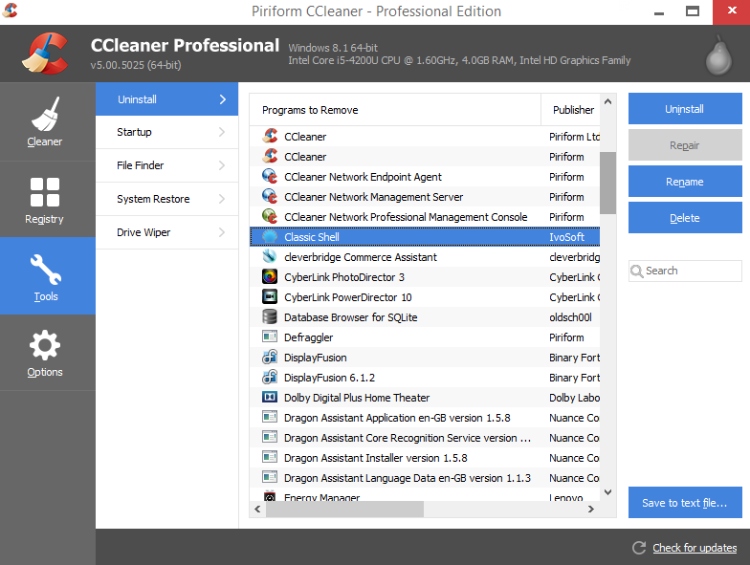 What else does Pro version provide:

The professional version of CCleaner includes personal customer technical support from the developer.

CCleaner interface is quite simple and convenient – all necessary actions for optimization of the system can be performed only by a couple of clicks. After installing and running the CCleaner, you will see the main menu of the program, which can be divided into 3 parts. 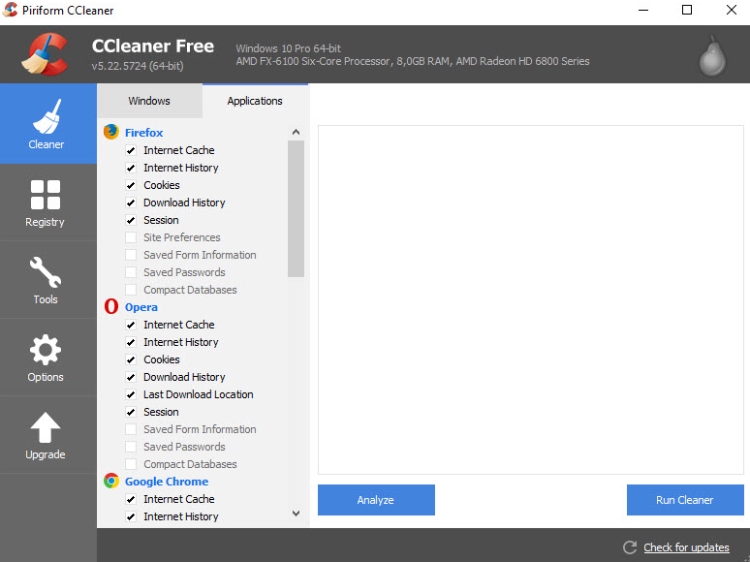 A huge number of programs have been created in the world to clean Windows from the garbage. There are both paid and free programs. And absolutely any program tries to attract the user by the fact that, with the help of their program, your system will work faster. So, CCleaner does.

In fact, the increase is not large or quite insignificant, which is hardly visible. However, after such CCleaner optimization, often the system does not work correctly: some settings are reset, the computer re-caches images, browsers have to reload tabs because the cache is deleted.

CCleaner optimizes the system, but not very clearly. After all, the computer brakes more often not because of the garbage accumulated in it, but because of a lot of running applications and services. And the banal removal of unnecessary programs changes the situation for the better than cleaning the system of garbage.

Besides, as we already know, CCleaner’s servers were hacked, and multiple computers and users were compromised. Of course, it was fixed quite quickly, but the bad aftertaste remained. A still popular system cleanup tool now always works in the background, reporting “anonymous” data to the company’s servers.

Constant reminders of the transition to a paid subscription, confusing and obscure updates are the reasons to get rid of CCleaner. These are the factors that initially pushed me away, but they added some more Windows issues after using CCleaner. So, I don’t recommend you to use CCleaner because it seems to be a scam.

How to Uninstall CCleaner

Step 1: Go to your PC settings.

Step 3: Select CCleaner from the list of the installed apps.

Step 4: Click the “Delete” button and wait for the end of the process. 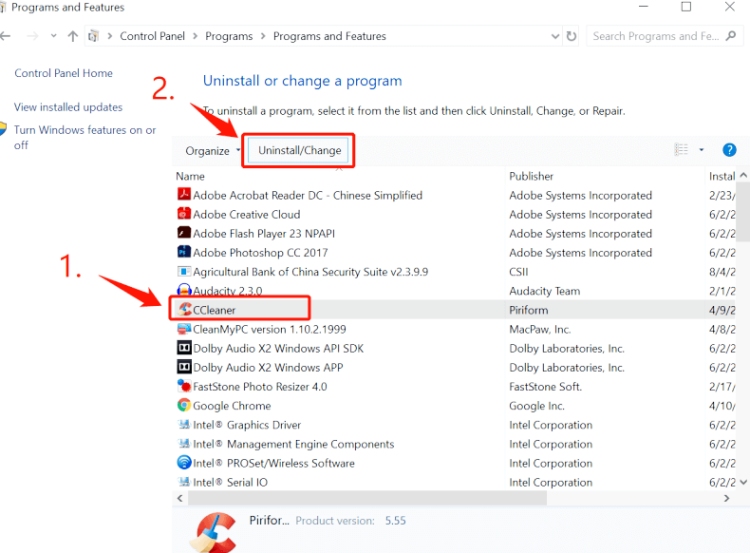 CCleaner Professional has a large set of functions and can be useful; however, it is not mandatory at all. Most of the provided functionality is already available in the system by default and meets the set tasks. The Pro version is a little different from the standard one, distributed for free.

Most users do not accumulate enough garbage on the computer for regular cleaning. It is enough to do it about 1-2 times every six months. And browser data can be deleted through its own functionality without launching additional programs. Cleaning the register, as practice shows – is an unnecessary thing, in general, as the remaining records after programs have no impact on PC performance since both they and the register themselves practically do not occupy space. And the market of utilities for cleaning and optimizing the system at the moment can offer much more effective and reliable solutions than CCleaner.