Home > Blog > Can You Rely on Windows Defender in 2022?
We review products independently, but we may earn commissions if you make a purchase using affiliate links on our website. We are not antivirus software; we only provide information about some products. Windows Defender comes for free with the latest operational system Windows 10. According to statistics, most modern-day users think that they’ll be perfectly safe with this free antivirus. But is it really that good, is it capable of protecting your device from every single online threat? Compared to the previous antivirus solutions from Microsoft, the Windows Defender is a serious step in the right direction.

It automatically installs with the system and guards it 24/7, until the user downloads third-party software. This antivirus might lack some key features that other products have, but it is more than good enough. Plus, this is one of the quietest anti-malware programs on the market as it doesn’t bother the users with millions of pop-up menus.

However, compared to third-party products, it is slightly dragging behind, which is continuously being proved by lab test results. Even the free editions of industry-leading products like Avast, Bitdefender, and Kaspersky perform better. Let us go ahead and talk more about these lab tests and see how the Windows Defender holds up against the best offers on the market (or just check one of the best antivirus software for 2022).

Is Windows Defender Good Enough in 2022? 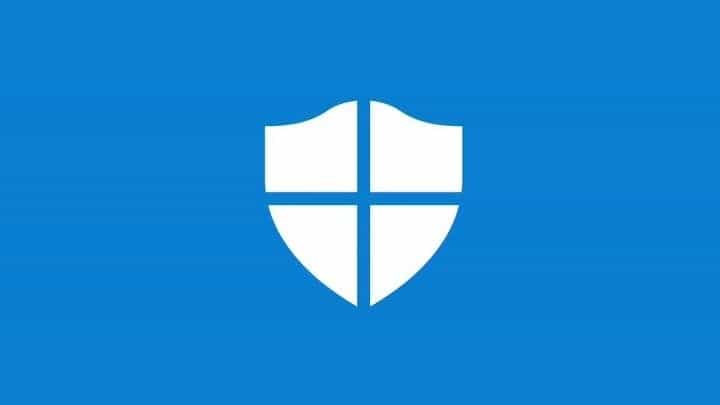 The pros of the Win Defender include low system impact, constant free updates, full support by Microsoft, and decent protection. To get the complete picture and to see exactly how bad or good this antivirus is, we need to compare it to other free solutions.

AV-Test is one of the most respected third-party testers – they’ve been in the business for 15+ years. They rank each product based on three factors (the worst score is zero, while the best is six).

The three factors include Performance, Protection, and Usability. In February, tests showed a substantial improvement over the April 2018 results. Win Defender received 6 points in protection and 5.5 in both Performance and Usability. In real-time tests against malware attacks, it managed to earn a 99.6% score.

AV-Comparatives has a slightly different approach, and it helps to understand an antivirus’s performance better. With a zero percent compromise rate, a 99.1% blocking rate, and 106 positives, Windows Defender looks more than decent. 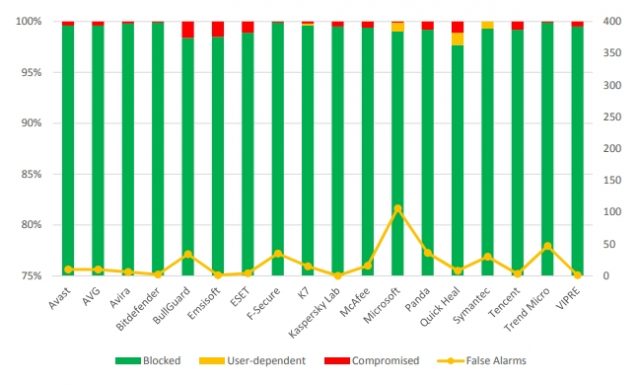 In March 2015, it could only block 80.5% of malware attacks, while the Protection rating was as low as 3.5/6. Back then, the average result was 97.2% in the industry – yes, Defender was well behind the leaders.

It is clear that Microsoft has been working hard to perfect the original formula. Today, their one of the best free antivirus solution is very well capable of protecting users from a vast majority of online threats. Next, let us take a look at how the best free third-party products perform in the same tests to come up with a verdict for Defender.

What Windows Defender Competitors Have to Offer?

As you can see, Win Defender performs quite well in the world’s most trusted tests. Still, it is not exactly on par with the best products. If we take a look at AV-Test Best antiviruses chart, we won’t find Windows Defender among the Top Products. As we have already mentioned, AV-Test evaluates antivirus solutions with regard to protection, performance, and usability. All the Top Products can boast a total score of 17.5 to perfect 18, while Windows Defender got 17 points. 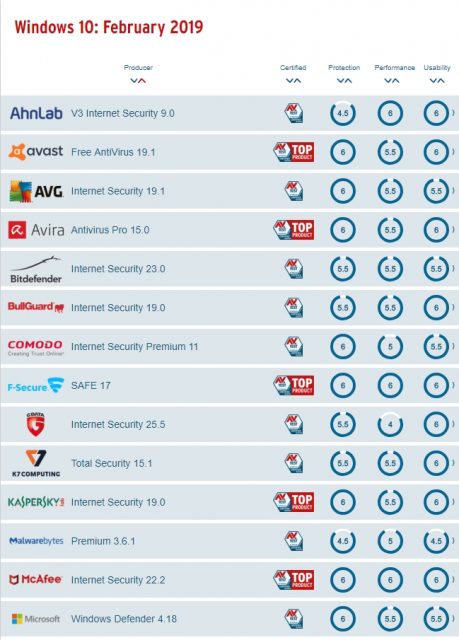 Should you consider getting one of the antiviruses with the top score? Products like McAfee or F-secure definitely offer better protection, more features, and simpler interface. And they will cost you money.

The only free top product in AV-Test chart is Avast. So, is it any better than Windows Defender? From the chart itself, it’s clear you’ll get better usability, and that’s it. If you dig dipper and read Avast antivirus review, you’ll find that extra features Avast offers include a free password manager and free web browser. Moreover, another lab, AV-Comparatives awarded Product of the Year 2018 title to Avast.

At the same time, according to the latest real-world protection test, Win Defender offers industry-leading compromise rate. It is on par with Bitdefender and F-Secure, while Avast shows less perfect results.

Summing up, while Windows Defender is a decent antivirus, it’s not the best free solution. According to AV-Comparatives and AV-Test, it is getting very close to becoming an excellent free product, but it is not there yet. As the tests prove, Avast, McAfee, Bitdefender and Bullguard are some of the best options for you.

A couple of years ago, the thought alone of using the Win Defender as the only antivirus would be strange. In 2022, it is a competent solution, a viable pick for regular users. We still highly recommend installing one of the top-score products we mentioned in this article to be 100% sure you’ll well-protected. As for Microsoft’s free antivirus, we hope that in the nearest future, it will become one of the leaders.

The most significant advantage of this product over Security Essentials, the previous anti-malware software, is that you don’t have to find a third-party alternative immediately. Of course, the tests we discussed earlier did show that it’s not in the top-10. But, it performs significantly better than ever before and won’t let new malware infect your system.