Home > Reviews > ClamWin Review
We review products independently, but we may earn commissions if you make a purchase using affiliate links on our website. We are not antivirus software; we only provide information about some products.

The craze to acquire an effective antivirus program has driven many a computer user to search for software that guarantees them 100% protection from viruses, and who will blame them. We all want our devices and data protected, don’t we? There is quite a lot of antivirus software online and some of them are either sold at a price or offered to users for free. ClamWin is one of the most popular antivirus programs currently used by more than half a million users, but how effective is the program? We will attempt to review it in detail to give you a clear idea about what you stand to get should you download it for use.

Before we answer this question, you should know that ClamWin is a free open source antivirus program that uses a ClamAV engine to detect and eliminate viral threats. It supports different Windows devices such as Microsoft 7,8,10, XP, Vista, 2000, as well as Windows Server 2003, 2008, and 2012. If the record obtained from the developer’s website is anything to go by, as many as 600,000 users make use of this program worldwide. Furthermore, ClamWin is an ideal device for computer users making their first foray into the world of digital technology.

As for whether ClamWin is enough to provide your device with sufficient protection from malware and spyware, we will be overly objective. ClamWin isn’t the best antivirus program out there. In fact, it will be ludicrous for anyone to rate it as the best free antivirus program available to users. However, ClamWin is an effective tool for scanning your device for viruses hourly, daily, and even weekly. With this tool, you can also schedule when scans should be conducted and what files should be scanned for viruses. All in all, it may not be the best stand-alone program, but when used in addition to other antivirus programs, it can be quite effective. 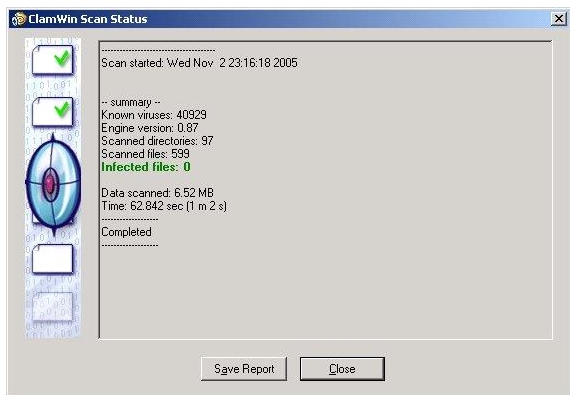 Here are some of the highlights that differentiate ClamWin from other free and open-source antivirus programs. Just how reliable is ClamWin antivirus? To answer this question objectively, we had to review the results published by reputable test institutes.

How did we test? AV-Test Institute performed a Virus test using ClamWin. The program was exposed to Trojan horses, Password Stealers, and different malware samples at their test zoo lab. At the end of the process, ClamWin detected only about 50% of them.

Another test was conducted by Virus GR using the ClamWin 0.95 version and the program scored 54.48%.

Going by the results above, one would be quick to reach a conclusion that ClamWin is not very effective in detecting multiple malware samples and they will be right. The program is not as bad, though, when you take a cursory look. In 2011, cNet gave ClamWin an excellent rating of 4 out of 5 stars for its cross-platform feature. Despite the vulnerability and drawbacks, this program is still positively rated because it has a functional database that is updated several times daily. The program also has a number of scanning options on its feature, which has proved to be effective in protecting users against the majority of common viruses and malware plaguing users. Even for files and folders infected with subtle trojans, ClamWin has proven to be quite effective. 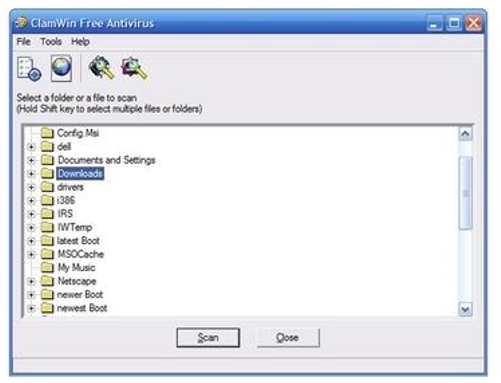 As for its ease of use, the developer(s) has clearly spent a lot of time designing the interface and menu setting to suit users who have very limited knowledge of antivirus programs. ClamWin is easy to install and setup. Once it is downloaded and the EULA is accepted, the program is installed automatically and ready for use. Another good thing about ClamWin is the menu navigation settings. The settings screen allows users to schedule scans for their files and folders, adjust scan filters to suit their needs, and also to configure their scan rules for Microsoft Outlook integration. To crown it all up, users can determine how often they want to receive updates by changing update frequency on the menu.

As far as pricing is concerned, there is nothing to worry about because the program is free. You can simply download it and use it at no cost. While some other programs have a free and paid version, ClamWin is relatively free.

Still, if you have billing (or other) questions, contact Customer Support via email:

Our ClamWin Review will be incomplete if we do not compare it with other antivirus programs of the same mold. To rate ClamWin’s effectiveness compared to other programs, we reviewed data released by AV-Test and AV-Comparative anti-malware institutes. We concerned ourselves with how each of the program tested was able to effectively

We also took our time to test some of these programs ourselves and what we found was not different from the results posted by both test institutes. From what we found ClamWin performed modestly at a rate of over 50%, but the other programs we reviewed did better in certain spheres. Find below our ratings for some of the best free antivirus programs.

Note: All the programs rated above have paid versions, but only the free versions were reviewed.

ClamWin is an open-source antivirus program that offers users all its features at no cost to them. In that regard, one will take whatever is offered as long as it can perform averagely. Expecting a free antivirus program to do the same work as a paid version is a no brainer if you ask me. Why? Simply because paid programs have inbuilt capabilities that free programs don’t have. Despite its vulnerability, ClamWin is a solid program to have on your device.

Using it as the only protection against malware is not advisable, though. But if you use it in conjunction with another program, you can rest assured that your device will get ample protection when in use and when not in use. Let me also add that the opportunity it affords users to schedule their scans periodically is also a great feature that I am sure you would enjoy. Using ClamWin is a win-win situation since you enjoy all the features at no cost to you.