Home > Reviews > MacKeeper Antivirus Review 2022
We review products independently, but we may earn commissions if you make a purchase using affiliate links on our website. We are not antivirus software; we only provide information about some products.

Allegedly, the former owner of the MacKeeper brand, ZeoBit, was fooling users to pay for fixes they didn’t need. And, since this app is known to cause severe problems for a Mac device, you’re probably wondering: is MacKeeper a virus? The answer is no, Kromtech MacKeeper is not malicious anymore. Sadly, that doesn’t mean it’s not confusing or frustrating in terms of usability.

Of all the available features, only a selected few have a value. So, while the price for this product is reasonable since most of the features/tools have no practical use, you’ll be overpaying if you go with MacKeeper. We are against using this software. The new company is doing its best to improve the stained reputation, but, you’ll still be better off without its product.

That doesn’t mean Mac devices don’t need anti-malware protection in 2022: they need it more than ever. If you don’t want to rely on a solution that used to be a scam and is average at best in performance, take a look at the leaders of the industry. There are several top-notch antivirus products for Mac (the best antivirus for Mac here) that will make sure your OS is well-protected.

While there are almost no virus threats for Apple devices, Trojans, adware, and ransomware are still capable of infecting the Mac OS. They mask themselves as music files, .dmg game launchers, etc. Therefore, while technically, no “antivirus” is needed for a Mac, without anti-malware protection, you’ll be in great danger. So, how good is MacKeeper against modern-day online threats – it is capable of keeping the Trojans and other malware at bay?

Sadly, there are no current lab test results available to evaluate this software. AV-Comparatives conducted the most recent tests in 2015, and for this industry, that is a very long time ago. Back then, it did not pass the test because of the reason we mentioned above. MacKeeper was tricking the users by saying that their devices were infected, but that wasn’t true. 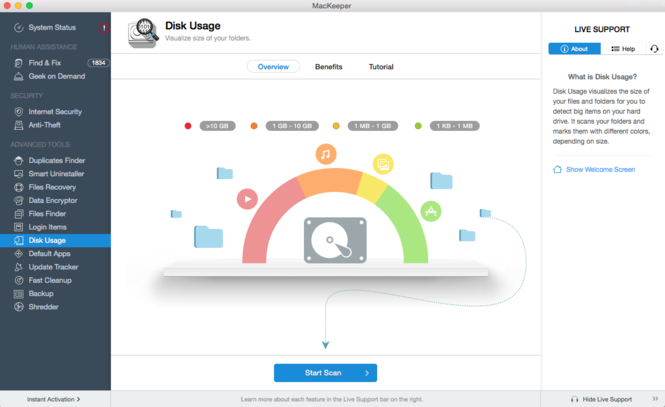 On the other hand, the antivirus did show a solid detection rate: up to 98% of the test malware files were dealt with.

Is MacKeeper safe, you might ask? While it’s not the worst anti-malware product on the market, it still lags behind the leaders (Kaspersky, Avast, AVG, and others). During this MacKeeper review, we tried to find other third-party test results but

What is MacKeeper all about? According to the official statement, MacKeeper is a combination of 17 powerful tools and apps for keeping the system safe and optimized, making it top antivirus. The question is – what value do they have, and will a regular user need every single one of them? It’s important to note that most of these apps are almost exact copies of the ones that are built into the Mac OS.

The list includes File Finder, Data Encryptor, Update Tracker, Disk Usage, and more. Most users are perfectly happy with what the standard apps have to offer. And for them, there’s no reason to pay for the fancy versions of the same thing.

True, it’s more convenient to have all these tools inside one little app, but that’s the only pro compared to what the system has to offer.

Now, that we’ve got the basic features out of the way, let’s focus more on the tools that might prove to be useful: 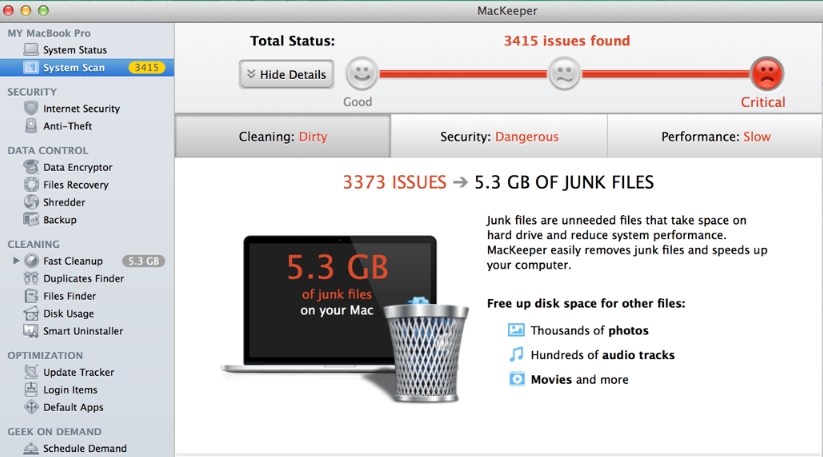 While you won’t be using these tools daily, they are still quite decent and carry a specific value.

The pricing policy is a bit odd, but, it offers the potential customers a choice between four subscription plans:

Users that are ready to commit would probably go with MacKeeper Premium, as it offers the best price and lasts for one full year. Plus, with it, you’ll get access to the Apple Support Professionals that can help you fix whatever trouble you have with the Mac device. Please be advised that with Basic, you won’t get anti-theft tracking, 24/7 expert support, and security updates. This is the most stripped-down version available.

If you’re looking for an alternative to MacKeeper, there’s a similar product on the market called Intego. First of all, it offers better prices; second, it’s more reliable and has a perfect reputation. For instance, Intego has been around for more than two decades. This is an excellent pick for essential Mac protection against all kinds of malware. More in our Intego review.

Identity theft is an emerging threat. But even basic antivirus products can deal with it. Good news: the MacKeeper users can take advantage of the ID Theft Guard and stay secure and private. This tool will let you know which passwords are weak and needs to be changed. Plus, whenever your data goes public, the staff will send out an alert.

Statistically, most online users create multiple accounts for social media, video games, and shopping. And, these accounts hold sensitive info (payment details, credit card numbers, names, and emails). Sadly, the majority don’t even try to come up with hard-to-crack passwords. To check your data for breaches, you need to add an email address for ID Theft Guard to check.

During the sign-up procedure, MacKeeper asks to provide an email; you can always add new ones. This module is a part of the MacKeeper antivirus and can only be accessed through its interface.

StopAD feature does exactly what the name suggests. It stops annoying ads from “attacking” you when surfing the web. Ad trackers are another thing that StopAD deals with, but let’s clarify. Trackers follow the user’s habits and show ads depending on his/her needs/preferences. StopAD is a browser extension for your Mac computer and doesn’t have any impact on system performance.

Available both for Safari and Google Chrome (for Mac), it can also be found in the MacKeeper interface. It’s located in the bottom left corner. By clicking the “Open” button, you’ll access a menu that allows enabling/disabling the extensions. That’s pretty much all you need to know about this feature.

If you’re still planning on purchasing this product, then you probably should learn about its customer service. We always include discussions of support into our reviews. While the Live Chat is available to everyone, Premium subscribers will get access to Apple Support Professionals – they will make sure that the user’s problem is fixed.

There’s also a remote support tool available on the official website. With it, support agents can take control over your Mac device and fix any flaws remotely. It will be like they arrived at your home and did everything hands-on. Overall, customer support is solid, and you get 24/7 phone/email along with the live chat. Too bad all the other aspects of Kromtech MacKeeper aren’t nearly as decent.

Contact Support Department via the following phone number and email:

How to Uninstall MacKeeper?

In the past, this software was extremely difficult to uninstall, and that brought a lot of negative attention to it. Thankfully, the most recent version isn’t nearly as hard to get rid of; you’ll even find a step-by-step guide on how to delete it on the official website. First of all, quit the MacKeeper app; secondly, drag it into the Trash on the desktop. A window will automatically appear on the screen: hit “Uninstall” and the system will do the rest.

This is important: as we learned during our MacKeeper review, every single file you encrypted with it won’t open after you uninstall the app. To access them, you’ll have to install MacKeeper once again and decrypt everything before getting rid of it once and for all. And don’t forget to restart the OS to complete the uninstallation of the antivirus.

Looking for good alternatives to MacKeeper Antivirus? First check our the best antivirus overall. Also we can help you:

We aspire to provide fair and educational reviews for the users. Thus, we are more than welcome to hear your observations based on your experience. In this regard, we follow certain principles in the verification of the user’s posts or reviews. Our guidelines pursue the following: equal treatment and honesty; non-abusive and non-hateful content; absence of conflict of interests and false accusations. We kindly ask you to follow these requirements when posting your objective reviews Cancel reply