In recent years, Bitdefender turned into one of the leading antiviruses on the market and is now on par with Kaspersky. As the independent third-party tests prove, this antivirus provides near-perfect protection from all kinds of malware and viruses.

Add low system impact, affordable prices, and great support, and you’ll get a must-have product. Ease of use and generous free trials are also among its strongest suits.

If you’re looking for basic, yet strong protection, Antivirus Plus will be a good choice. Internet Security, in turn, provides parental control and more advanced features.

Total Security is the ultimate offer from this company and comes with an impressive set of additional features. Check the “Package Features” section once again to find the plan that best fits your needs and budget.

As a leading antivirus solution, Bitdefender is very popular among international users. The algorithms are strong and will protect your sensitive data from any malware, ransomware, and other viruses.

Pricing is also fair, and it’s probably the biggest selling point of this product. The company is well-known and recognized around the globe; they’ve been building their reputation for many years. If you are not really convinced – it might be useful to check the list of antivirus companies (what is the best antivirus) and see that Bitdefender is among the best of them.

Kaspersky Lab might be a bigger name in the industry. However, Bitdefender Antivirus is just as great at battling viruses. Independent third-party companies always put it high up on their lists. Currently, Bitdefender has approximately five million loyal users across the globe. So, let’s take a look at the pros and cons to see whether the Bitdefender products will melt your heart or not:

We like:
Malware protection deserves our highest praise
This is one of the fastest antiviruses in the world
System impact is light
Online support is superb and can be accessed 24/7
The free trials are very generous
This antivirus comes with many features that you won’t find in most rival products
If you’re looking for even better protection, the advanced security packages will get you covered
We don't like:
The standard Bitdefender only works on a personal computer with the Microsoft OS; no offers for Mac, iOS, or Android devices
Full scans are very thorough; however, they are quite slow (especially the first one)
The price is a bit steep

In the thorough tests run by our team of experts, Bitdefender easily eliminated 99% of threats. Only McAfee (Total Protection) managed to earn a perfect 100%. AV-Test, a German third-party company, also put the antivirus through a series of tests. Bitdefender detected 100% zero-day and widespread threats (both in Win 7 and 10). Still, Bitdefender flagged eight apps as potential threats; Kaspersky achieved the same result without any false accusations.

In real-world tests ran by AV-Comparatives (an Australian third party), this antivirus earned a near-perfect score of 99.8. Surprisingly, in the SE Labs tests (this is an English tester), Bitdefender ended up earning the #7 spot (overall, 13 products were tested) with a total score of 96.

As for system impact, it is very light. Also, while the software does take up a lot of RAM (up to 700MB), that doesn’t put a strain on the OS or the device, and you won’t even feel it working in the background. There is almost no impact on the CPU. Our experts took their time to determine the overall system impact. On an average computer, Bitdefender slowed down the device only by 8-10%. For example, some products can have a 50% negative impact.

This antivirus’s malware protection is rock solid. Whenever Bitdefender finds suspicious files/code, it instantly compares them to the database. At the same time, it keeps monitoring their behavior. Any new and unknown piece of code goes straight to the dedicated servers for analysis. Throughout the day, the company updates the computers of 500+ million users with new, improved signatures.

Even if you refuse to let the antivirus collect data from your device, you’ll still get these updates. Safe Files was specifically designed to protect key documents on your device from any virus/malware that is trying to infect them.

Ransomware might not be as dangerous as 2-3 years ago, but it’s still a significant threat. Thankfully, Bitdefender is very well capable of protecting your device from any ransomware. First of all, it blocks access to any infected URLs; secondly, the antivirus detects malware by its signature. The Safe Files feature, in turn, allows only the most trusted apps and software to access the critical folders and files in your OS. 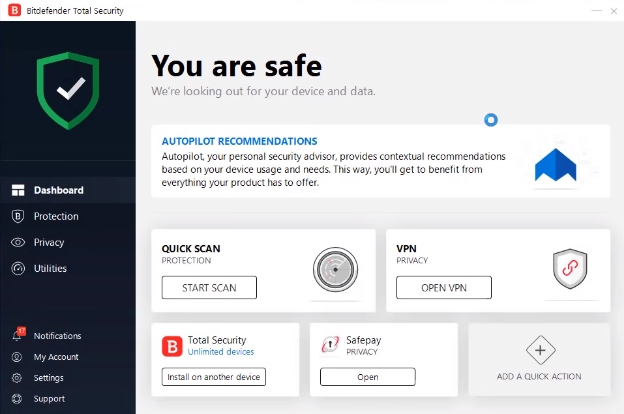 There’s also a behavioral monitor that detects and prevents all the latest ransomware from encrypting files on a user’s device. Ransomware Remediation, a brand-new feature of the 2020 Bitdefender products, backs up potentially targeted files and puts them back once the threats are dealt with.

Protection against phishing is also very impressive. Bitdefender’s anti-phishing protection is considered to be among the best and is on par with that of Kaspersky. It did fail to block several phishing websites during our tests, but that’s not critical. Overall, it provides excellent protection against these types of threats.

The Bitdefender download procedure is very friendly and straightforward. Just follow the simple instructions, and the antivirus will install itself on your device in a matter of minutes. The green “check” on the dashboard means you are well protected and there are no immediate threats.

The trademark Autopilot option is quite intriguing: If you turn it on, the antivirus will assume control and switch between various modes to best suit the current task. When it’s off, the user is free to choose between 5 modes: game, movie, work, Wi-Fi, and Battery.

The interface is very informative and easy to navigate. On the main screen, you’ll instantly see a series of recommendations for speeding up the OS. Quick scans are also one click away; the same goes for the VPN.

If you want to get access to Bitdefender’s features like the Firewall, Safe Files, Anti-Spam, and others, use the “Protection” menu on the left. The Password Manager, Webcam Protection, and Parental Control are all in the “Privacy” menu. Everything is easily accessible, and even a novice will be able to make sense of it all.

To make your device work faster and to tune it up, go to “Utilities” – that’s where you’ll find one-click optimization, clean disk, and other useful tools. For more advanced configuration options, click on the “Settings” menu in the bottom left corner. Most of the time, it’s advised to leave everything as it is unless you know what you’re doing.

As with most other antivirus products, a quick scan is available on the dashboard. A full scan can be launched in the “Privacy” menu. Scheduled scans are also at your disposal: command the antivirus to run scans at night, during the weekend, or whenever you’re out of the house.

Bitdefender’s quick scans last 7-8 seconds, which is very impressive. The full scan, in turn, can take up to 1 hour and 30 minutes, but the more you scan, the less time it takes.

Note: whenever you plug in a flash drive (or any other external data source, like a CD or a DVD), Bitdefender will run a quick scan on it. There’s even a vulnerability scanner (it checks the OS for any flaws in security and up-to-date updates). Here’s what the Wi-Fi scanner does: when there are weaknesses in your network, like weak encryption or basic passwords that are easy to crack, the scanner immediately informs the user.

The following list includes Bitdefender packages that provide the best value for the average users:

Bitdefender Free Antivirus. According to international experts, this is one of the best free antivirus solutions. However, there’s a big downside: it is only available for PCs running on Windows OS. Macs and mobile devices aren’t supported. Even though this is the most basic version of Bitdefender, and the list of features isn’t particularly impressive, you’ll still get solid protection for your computer.

Bitdefender Antivirus Plus. As an entry-level commercial package, Plus is the most popular plan among Windows Bitdefender users. Here’s what you will get with it:

Bitdefender Total Security. With this package, you’ll be able to protect not only a Windows OS, but also devices running on Android, iOS, and Mac OS. Therefore, this is the most commercially-successful Bitdefender package. Like Internet Security, it includes all the features from the previous plans and adds some of its own: 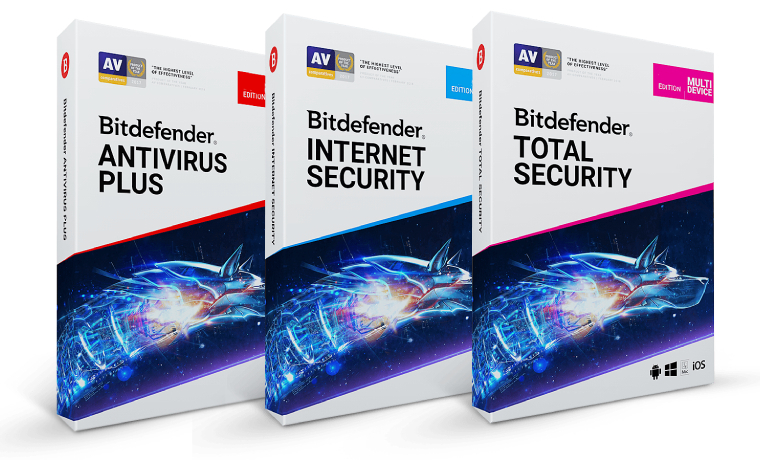 Bitdefender Antivirus for Mac is a solution designed specifically for this OS, and it is comparable with Windows Antivirus Plus package both in terms of capabilities and price. Along with malware and ransomware protection, you get an ad-blocker and a VPN.

Bitdefender Mobile Security for Android. This package offers a friendly interface, a robust and reliable antivirus engine, and an affordable price-tag. A VPN and an anti-theft feature are included in the deal.

iOS package is 100% free (you can get it on AppStore) and also comes as part of Total Security and Family Pack. It is a combination of a VPN and a data protection tool that would block your device in case of theft or loss, erase your sensitive information and check your e-mail for breach.

Bitdefender Family Pack. This product is perfect for families that have multiple devices at home. It gives the users an unlimited license for the Total Security package.

Bitdefender Box 2. This is the most advanced offer from the company. It is, indeed, a fairly big box that will protect every single device in your house. Advanced parental control options, double-clad security, and Total Security for one full year – that’s what you’ll get with Bitdefender Box 2.

Premium VPN. Bitdefender’s Virtual Private Network is excellent for securing Wi-Fi hotspots, protecting your passwords/logins and bank info, and provides unlimited traffic. It is available for all the major platforms.

Every single Bitdefender package offers a 30-day trial (it is 100% charge-free). All you’ll have to do to get it is to visit the official website, create an account using your email, and that’s it. New users can take advantage of the Total Security 90-day trial (the procedure is the same).

Competitive pricing is one of Bitdefender’s trademark selling points. Let us take a closer look at all the available packages and their respective prices.

The table features full prices, but you can often get some package with a generous discount. Currently, you can purchase the Total Security package for 10 devices for just $44.99, and the Mac package for 3 devices will cost you only $39.98.

If you want to try and solve potential problems on your own, go to the official website. There, you’ll find a vast collection of helpful articles – they are written in plain and simple English. The user forum is also worth your attention. It is never empty, and new users join every single day.

If you’re a paying customer, Bitdefender will provide you 24/7 access to Customer Care with telephone calls, emails, and a live chat. The team is highly professional and is quick to answer your questions and provide solutions.

Bitdefender Coupons: Get Your Promo Discount

Being one of the major providers of antivirus software, Bitdefender runs a promo campaign for its new users. With Bitdefender coupons, one can save up to 56%. So, the most popular AV suite from the provider – Bitdefender Total Security – is available at the price of $39.99 instead of $89.99, which is a great value for money. The suite includes complete protections for up to 5 devices.

Bitdefender Premium Security with the promo code is available at $89.99 for the first year, which is 40% off the initial price. Its cost without a discount is $149.99.

Looking for good alternatives to McAfee Antivirus? Check these: